A Paratrooper’s Memories of D-Day 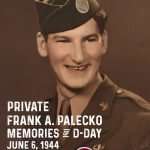 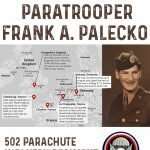 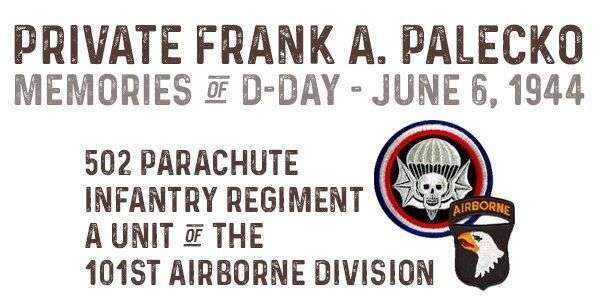 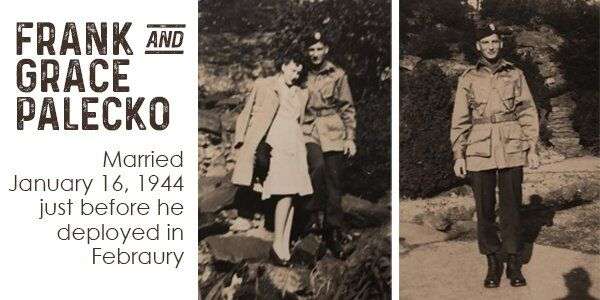 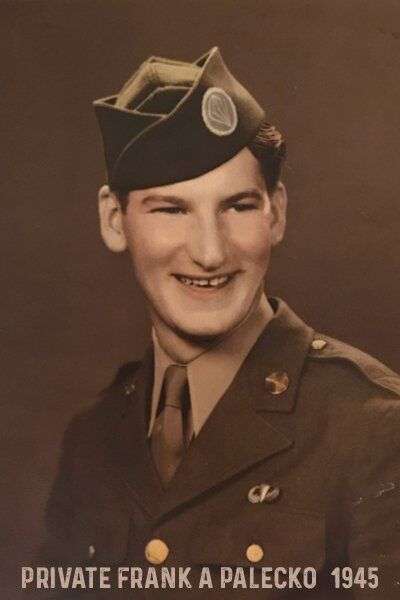 When I was a junior in high school I was an exchange student in Tours, France. When we studied World War II, I mentioned to may teacher that my great uncle had been a paratrooper during the D-Day invasion.

My teacher was very interested to have a first-hand account instead of just relying on the history books.

I wrote to my great uncle and he was kind enough to respond with as many details as he could remember.

His letter was written on May 17, 1985. For decades I have occasionally thought about the letter, looked for it, and lamented over the fact that it seemed lost in time, moves and the chaos of everyday life.

But on June 3, 2020, while I was searching for a family tree requested by a family member, I was delighted to find his letter and knew I not only wanted to share it with his 6 kids and his many grandkids (not sure of the number!) but also online, for anyone looking to learn more about what happened before, during and after D-Day, through personal stories.

Here is Frank Palecko’s story – a 22 year old whose plane was shot down, who lost most of his regiment, was captured and survived to build an amazing life after the war.

Both Aunt Grace and I always check with your mother and father and we keep informed as to your well being. We are proud of you.

I will try to answer some of your questions about the “Normandy” invasion which took place on June 6, 1944, over forty years ago, probably before your history teacher was born.

I was a member of the 502 Parachute Infantry Regiment, which was a unit of the now famous 101st Airborne Division. I joined the army in January, 1943, and finished my basic training at which time I volunteered for the parachute troops. I earned my jump wings in October of 1943, continued training and was shipped to Great Britain in February, 1944. We continued training in England in a small town named Hungerford. I was twenty-two years old at that time.

On Jun 1, 1944, we were taken to another camp and isolated from all other soldiers and civilians so we would not discuss our now assigned missions which were in Normandy, France. After a nice dinner on June 5, 1944, we were making final preparations for our combat jump, which in my case, was mostly prayer. We rubbed the usual burnt cork on our faces and on the back of our hands so as not to reflect moon light if any. I boarded my plane with sixteen other soldiers and we then went aloft and the pilots formed an armada many miles long, well over fourteen hundred planes. At about 12:30 am, I looked out over the English Channel to see hundreds of boats heading for Normandy.

As we approached our “Drop Zone”, the sky was full of tracer bullets and exploding anti-aircraft shells, our plane was hit. We received the signal to jump via a red then green light which was turned on by the pilot to tell us to jump. It was total darkness and all seventeen men exited the plane, I was number sixteen or next to the last to jump. I immediately hit the ground as we were extremely low. The time was 12:50 am. Out of the seventeen men only four managed to assemble on the ground. After searching for over thirty-five years, I have managed to find only two survivors of the other fourteen.

My job was to get a count of weapons and ammunition in “H” Company and report findings to battalion headquarters. A jeep and a driver were supposed to meet me the next day and help me retrieve bundles of ammunition and supplies. We then would deliver these items to where they were most needed. We were expected to kill the enemy if they got in our way. The three men and myself were about fifteen kilometer from where we should have been, deep in enemy territory. The name of the closest town I can not remember.

At dawn on June 6, we awakened a French farmer and he gave us the proper location, as we had maps and compasses we proceeded to our “Drop Zone”. Needless to say we never got there. Late afternoon on June 6, we ran into a company of Nazis and after a skirmish there were only two men left, myself and a medic who was unarmed. One man was killed and the other shot in the legs. We were (the two left) completely surrounded and had no choice but to die or raise our arms in surrender.

I was taken by myself to a Nazi headquarters and interrogated. I was forced to strip naked and all my clothes were scrutinized for possible hidden capsules of poison or other weapons.

As my name was on my dog tags and a white heart painted on my helmet, it was easy for the interrogator to know which unit I belonged to. He had many books of records on his desk and proceeded to look for my name which he soon found. He then named my company commander and others in my unit.

The next morning I was taken to the civilian prison in Cherbourg and told I was a spy and saboteur and would be shot. In the next couple of days other American prisoners were brought in.

At the this time the Nazis realized that the invasion was successful and they then moved all prisoners to a more secure area. I spent time as a prisoner in various French towns such as Chartres, La Chappelle, and others whose names I can’t remember. I arrived in Germany sometime in late August weighing about one hundred pounds. The Nazis did not feed us very well, we were lucky if we got water to drink. I spent the rest of the war in Stalag X11A in Limburg, Germany.

Sometime in April, 1945, the camp was overrun by American troops and I was released, hospitalized and sent home. I went back to work in a large supermarket as a meat cutter and then became manager.

I remember the French people as kind and sympathetic. It must have been a horrible life to live under a Nazi Regime. I have returned to France on two separate occasions and was well received. The French people were and are still grateful for our efforts in liberating them. My fellow soldiers love the French people.

Tara, it was very difficult for me to remember these incidents which took place over forty years ago.

My best regards to your teacher and all the students at your school. Looking forward to seeing you in July.

Frank Palecko spent 300 days as a prisoner of war. In 1957 he founded Palecko, Inc and was a distributor of Hartz Mountain pet products.  He passed away in 1994 at the age of 73.

He was married to my paternal grandfather’s sister and when my dad, George Reed, was orphaned at 14, he went to live with his aunt and uncle and their 6 kids.

Map of the Locations Mentioned in the Letter 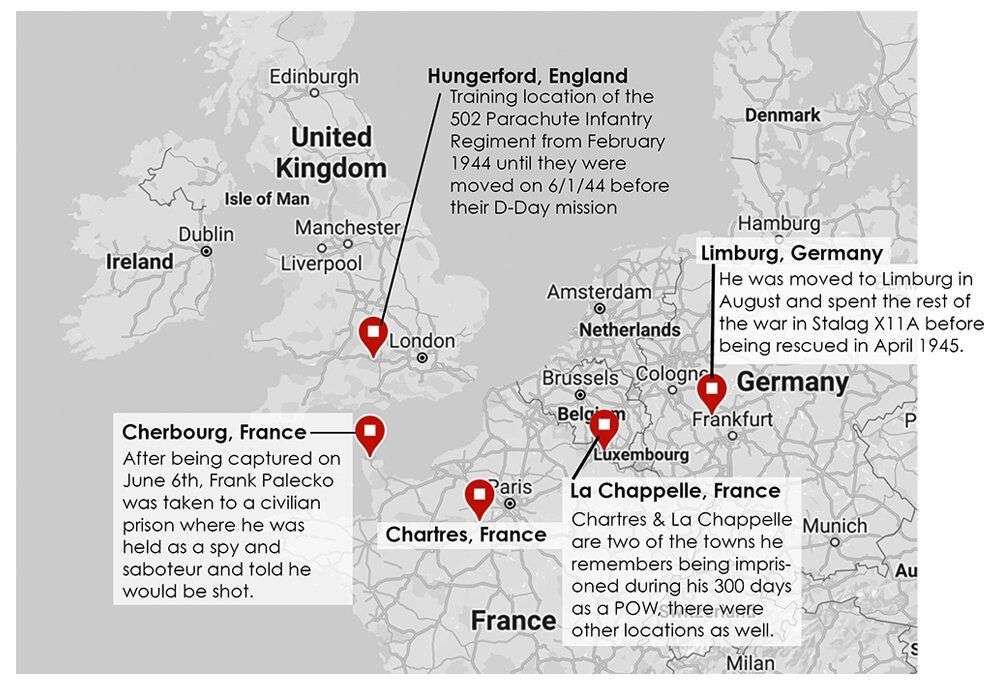 These medals hung in a frame in Frank Palecko’s game room. We believe he received a Purple Heart and a few other medals but don’t know who in his family has them.  A brief description of each are below. 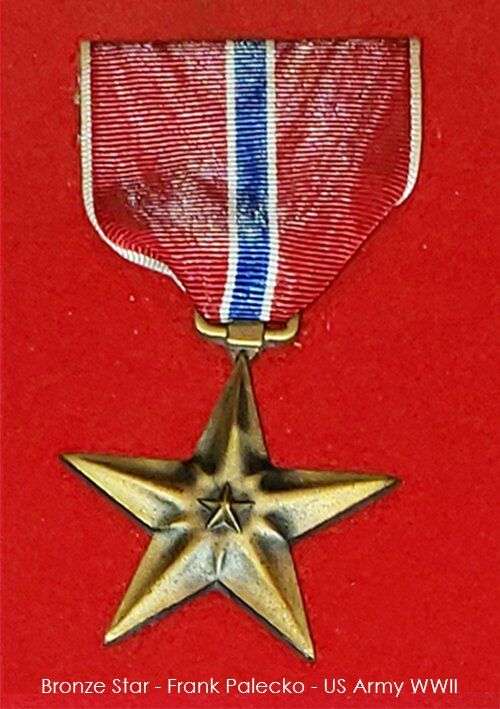 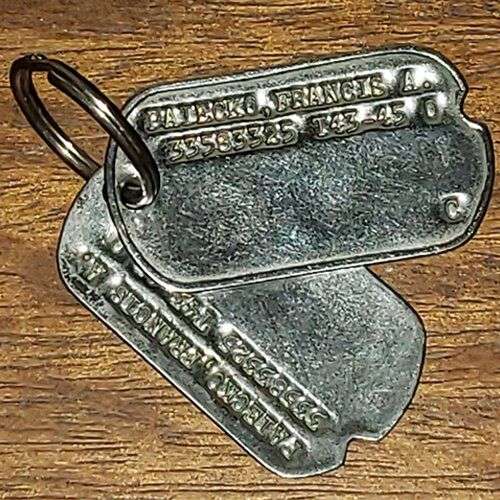 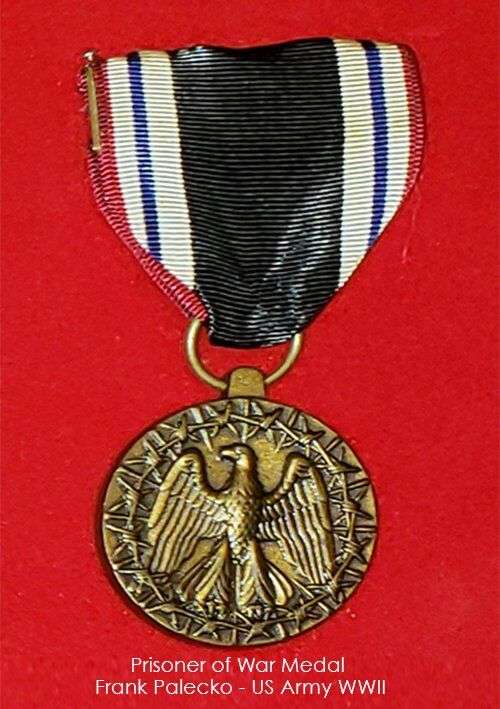 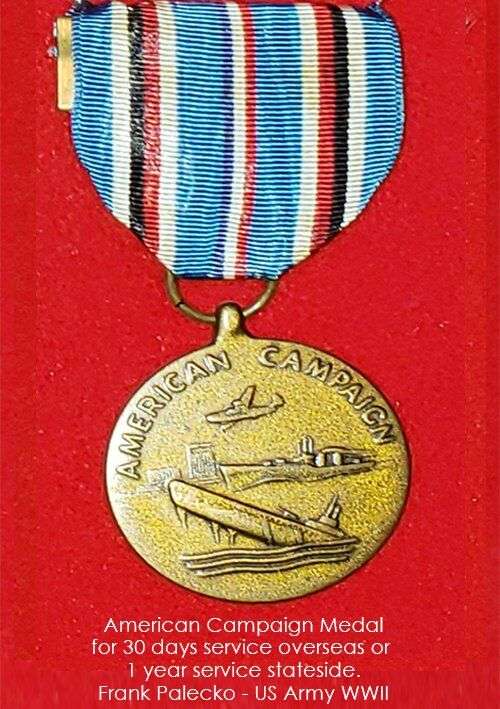 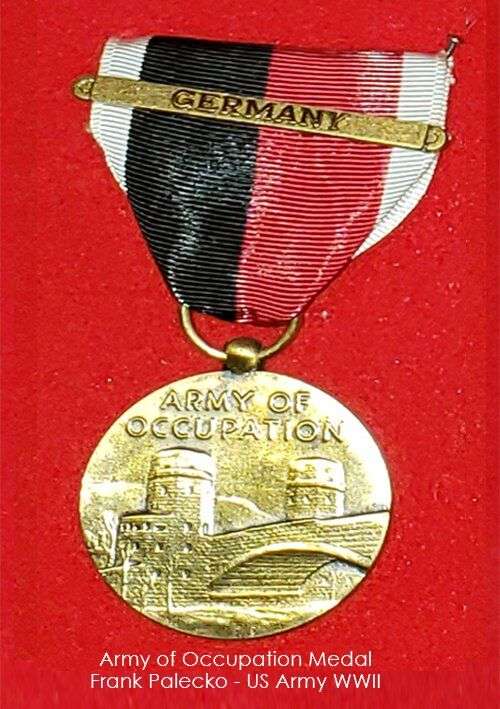 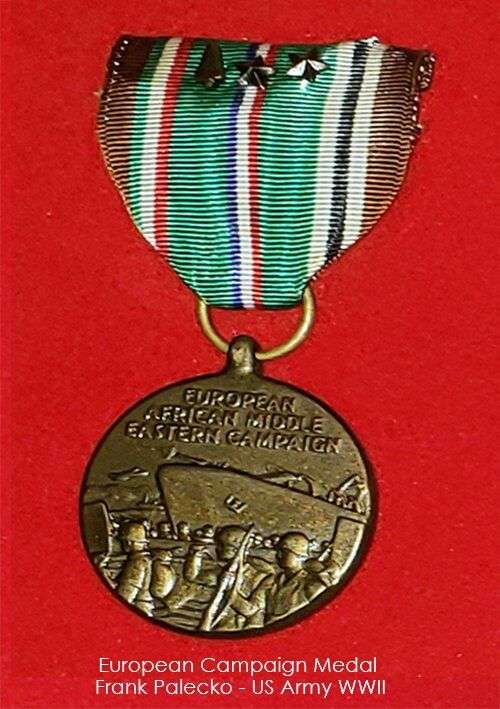 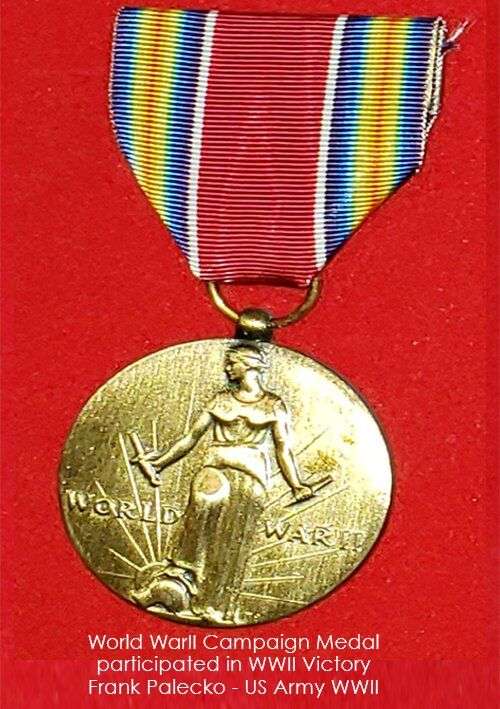 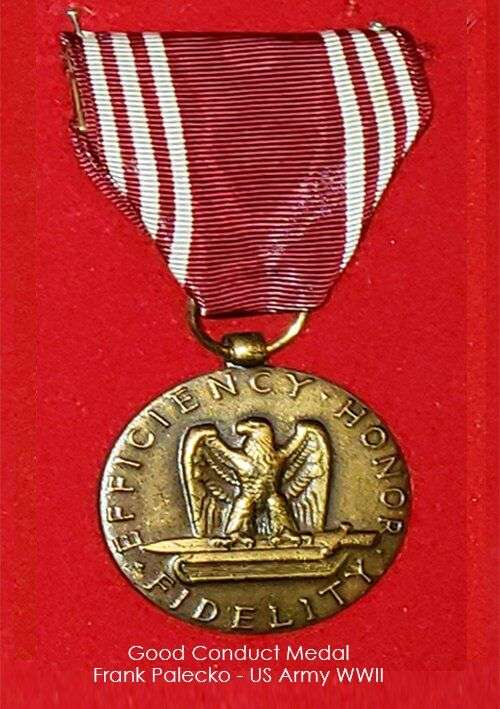 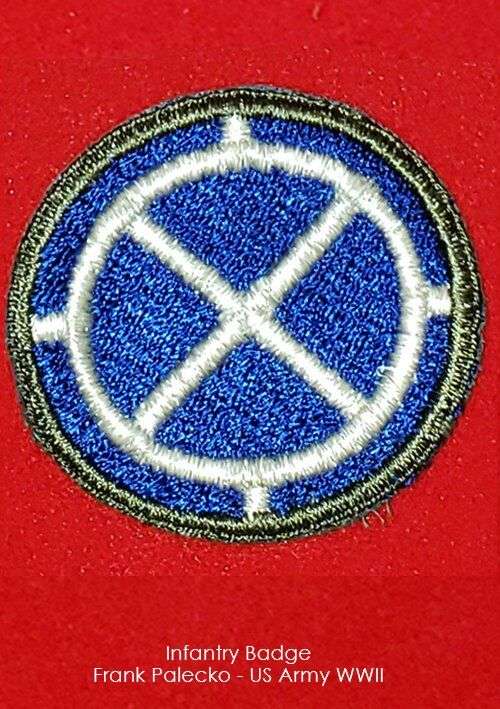 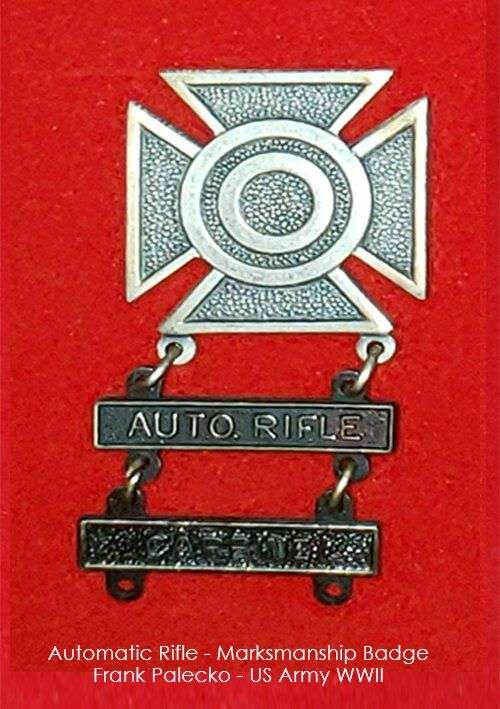 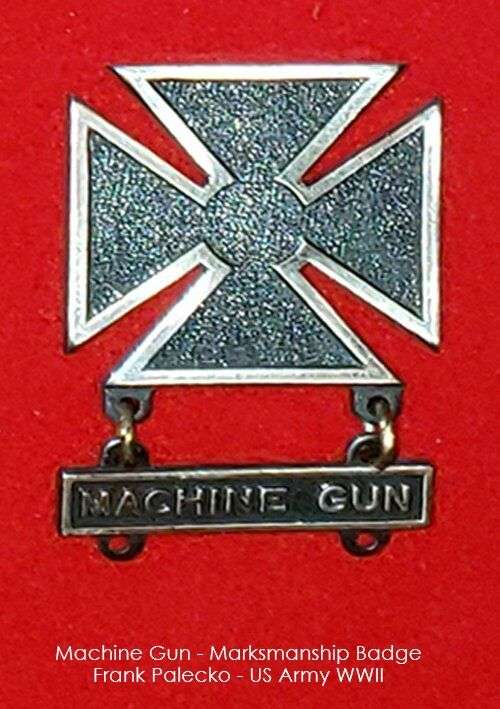 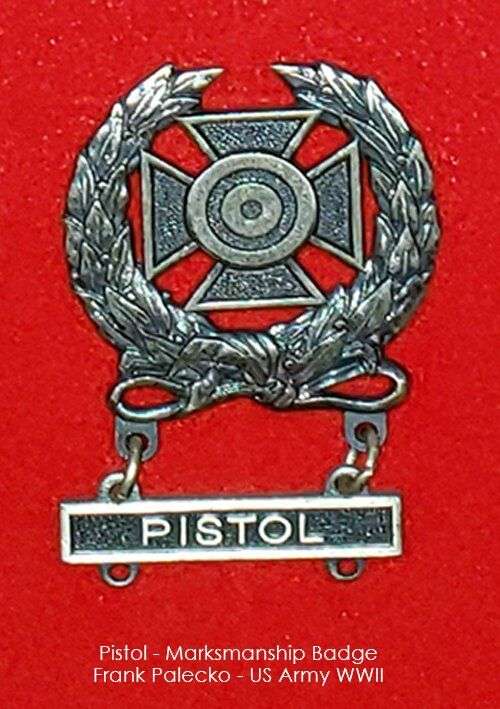 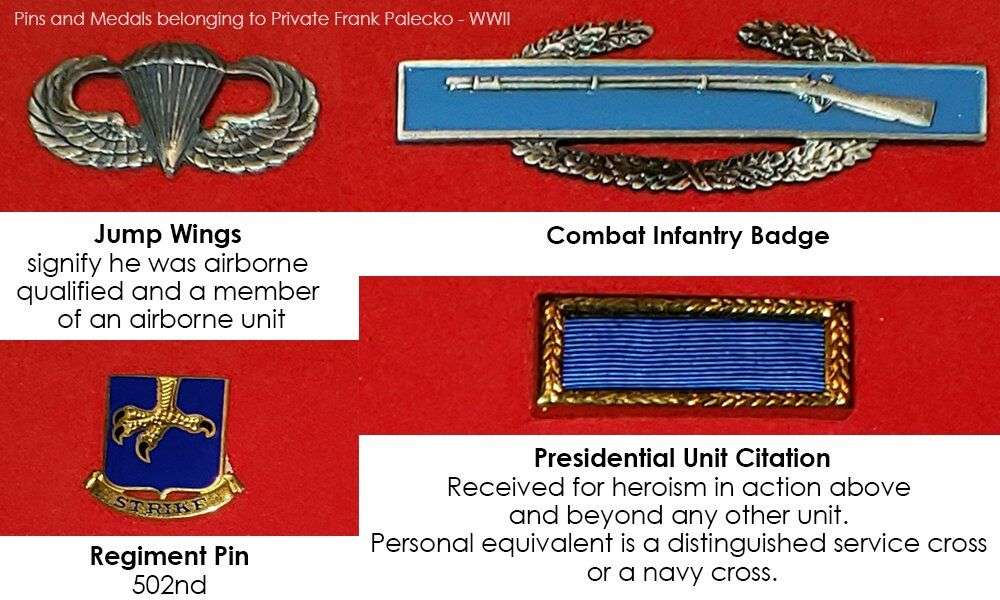 From notes on the map it looks like he was also held in Stalig II B in Hamerstein, Germany at some point. 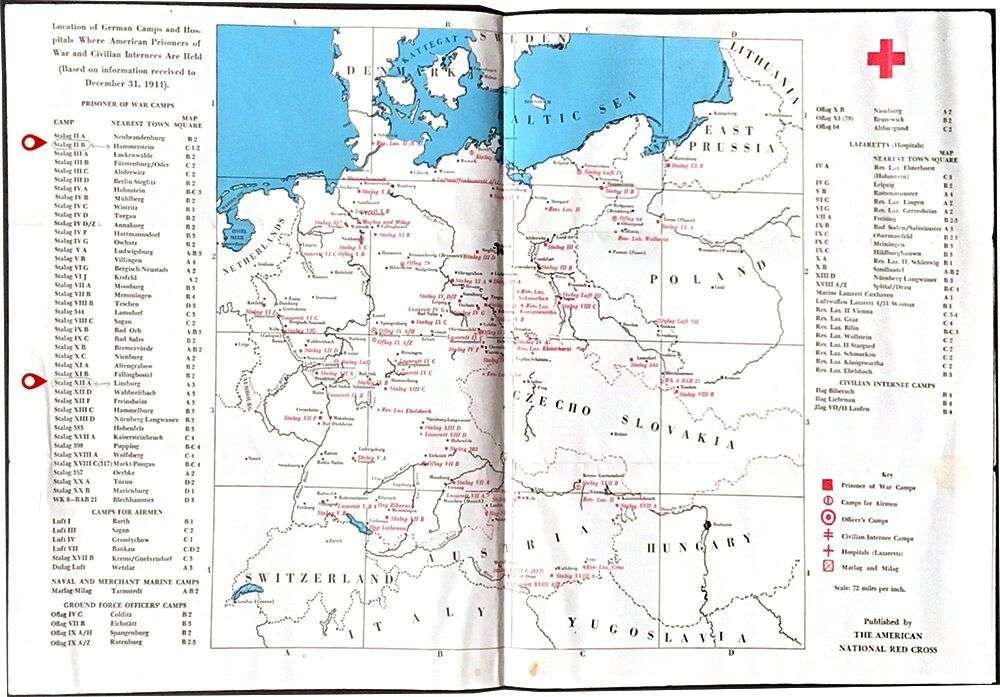 Hand-written notes by Frank Palecko about different dates and events 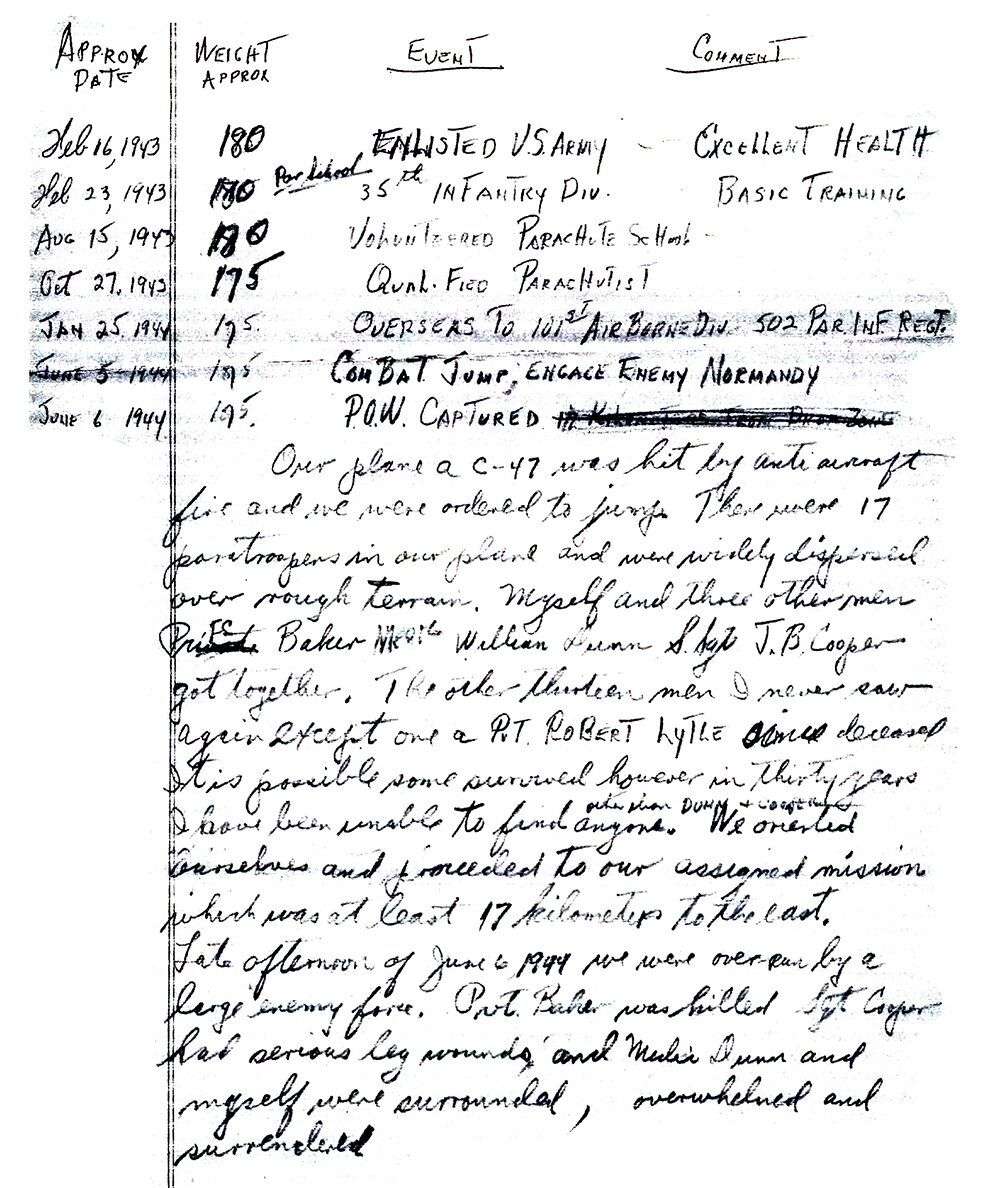 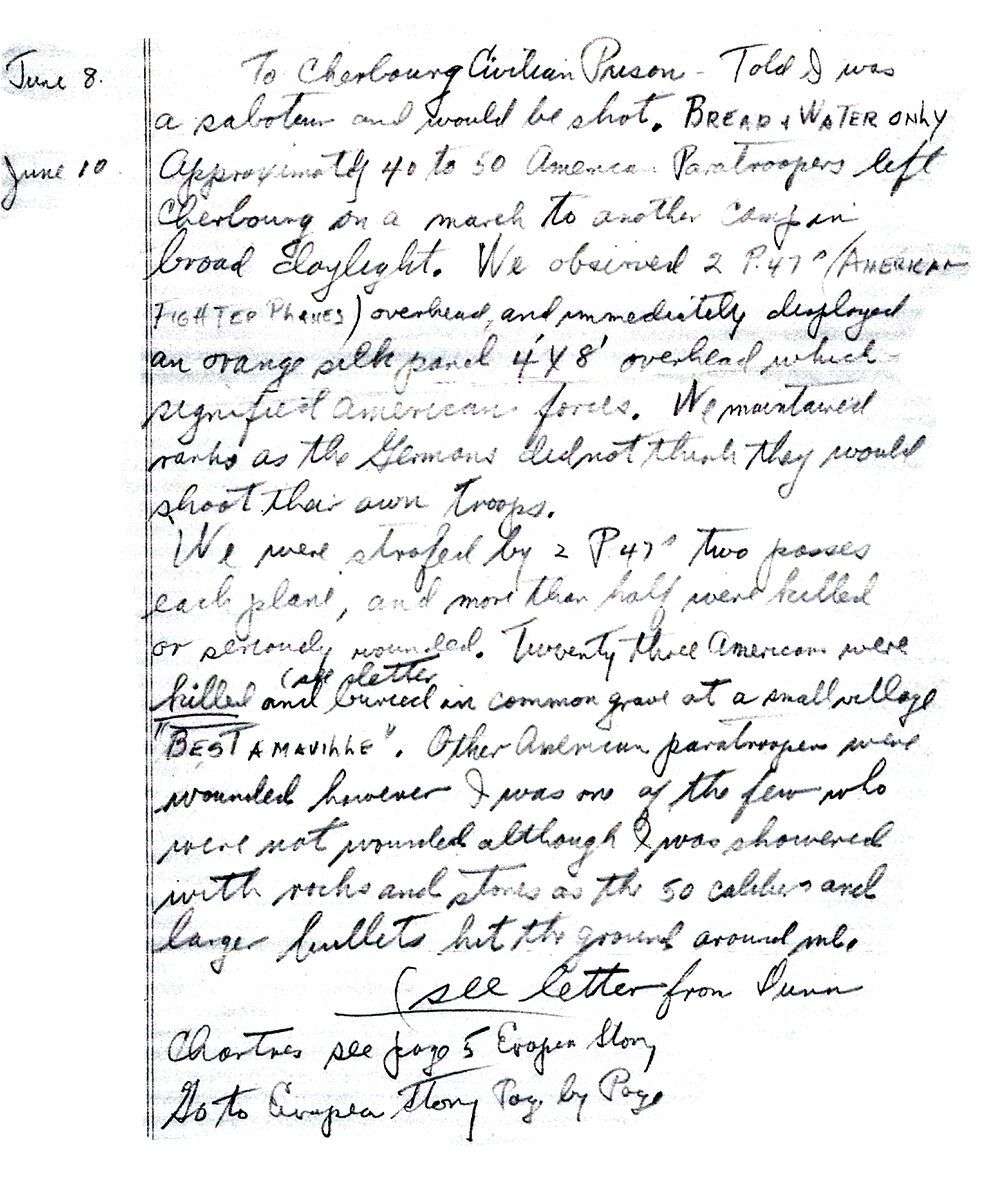 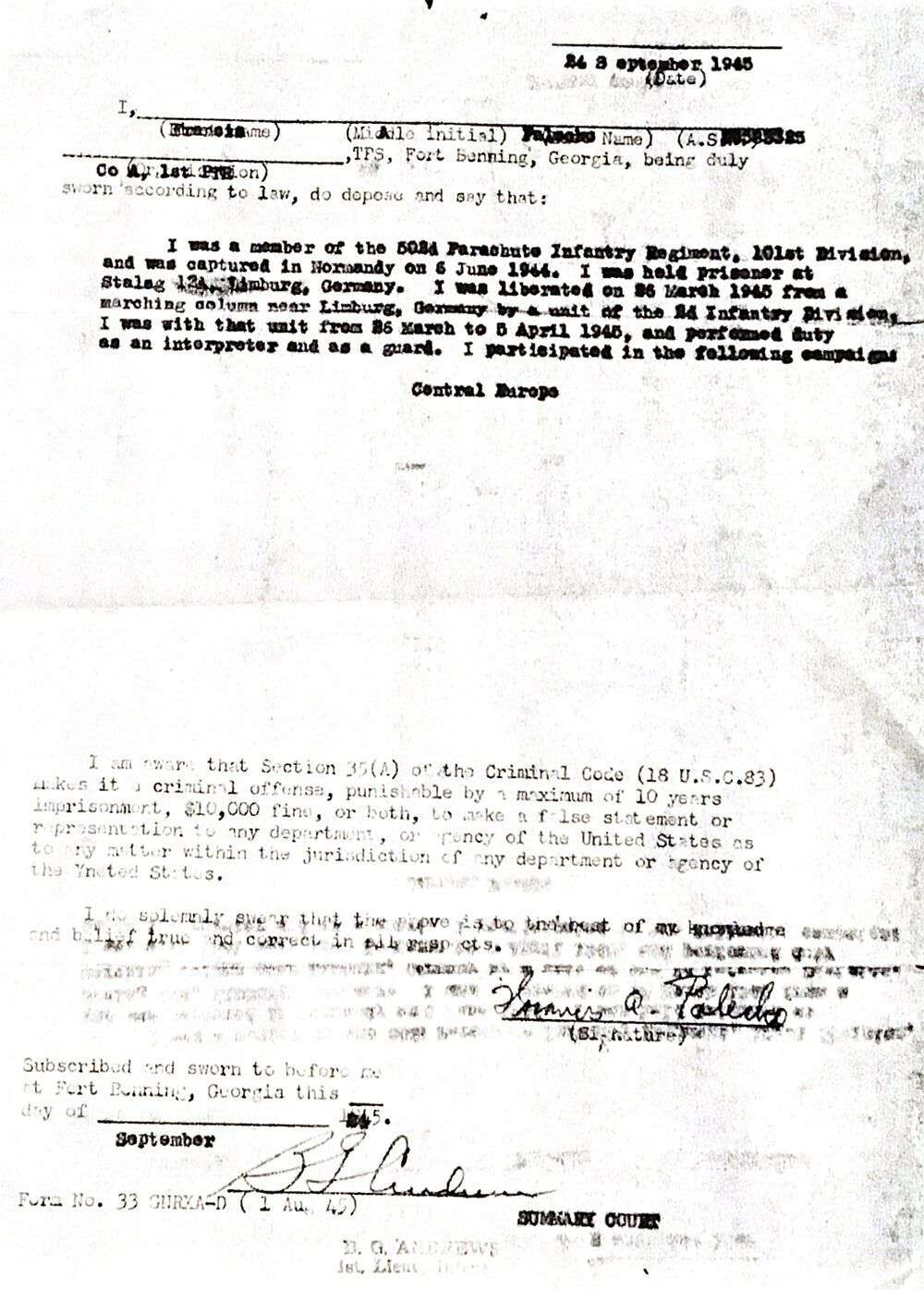 Photo of Frank Palecko on a trip to Normandy, France in 1976 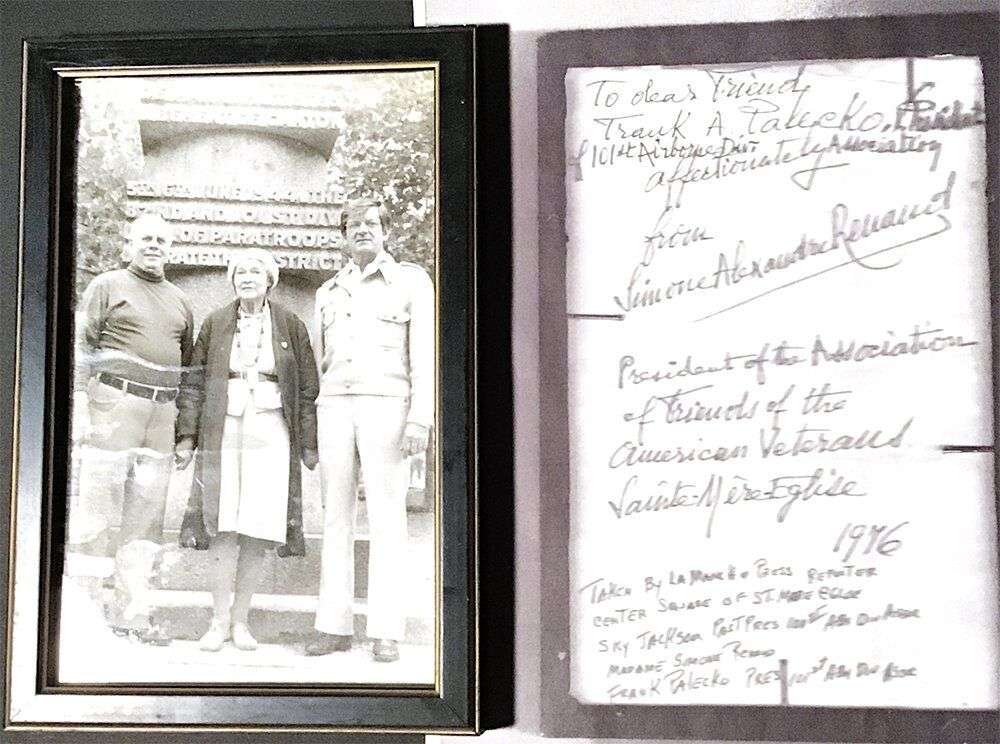 Writing on the back of the photo:

This site uses Akismet to reduce spam. Learn how your comment data is processed. 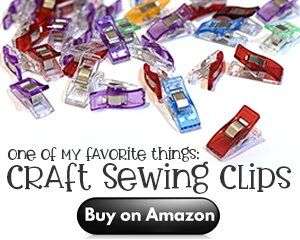 The eagle’s face on the panel of the Let Freedom

Just another sewing Sunday... (and yes! Singing it